Doors Open at 7PM; all Summer Stage events are 21 and over!

At 18, New York native Sydney Irving may only be in the early years of her music career, but she has already been named the 2020 young adult artist of the year by the International Singer Songwriters Association.

Similar to other contemporary artists, Irving writes songs that mean a lot to her and that she hopes will resonate with others as well. Taylor Swift was her early inspiration, but her current hero is Tom Petty.

“I think it is just the way they could write a song about their lives and what they were going through,” Irving says, “and you could connect with it immediately.”

Her musical influences also include artists like Barns Courtney, Midland, Ronnie James Dio, The Doors and, perhaps not surprisingly, bad boy Ryan Adams, who actually recorded his own tribute to Swift’s 1989, covering the entire album.

Once she got to playing and writing herself, Irving didn’t look back. At only 14, her debut album, “Hello Stranger”, was released. This was soon followed by her sophomore album “The Halfmoon Sessions” in 2018. In December 2019, Irving released two EPs; “The Greene EP”, a live compilation of previously released songs, recorded in a log cabin located in upstate NY with Tom Finn and Steve Sopchak and “The Ronan EP” with Sydney Irving & The Mojo. In 2020, She released her fifth album “Relax With Fiends”, followed by her summer inspired single, “Seasons Change” in 2021, earning her a number one spot on the Music Mafia Radio Top 30 Countdown.

Irving has been fortunate to have had the opportunity to be direct support for Starship featuring Mickey Thomas at the 2019 Spiedie Fest in Binghamton, NY as well as Martina McBride a few years later in 2021. In 2019, Sydney attended a Barns Courtney concert. She had the chance to meet him before the show and then during the show, Courtney called her up on stage to sing his hit song “You & I” with him! She has also had the privilege to open for artists like Thompson Square, Jake Dodds, Matt Rogers and Mikele Buck as well as be the youngest artist to have a residency at the largest casino in New York State.

Sydney Irving, who has been nominated for best singer/songwriter at the Syracuse Area Music Awards four times, has been writing songs since she was twelve with her guitar. Sydney is a proud Breedlove Guitar endorsed artist and has played Breedlove guitars ever since receiving her Breedlove Passport-12 string at the age of 13. Along with being named the 2020 Female Artist of the Year by Music Mafia Radio, now at 18 years old, Sydney is following her dreams of pursuing rock n roll. 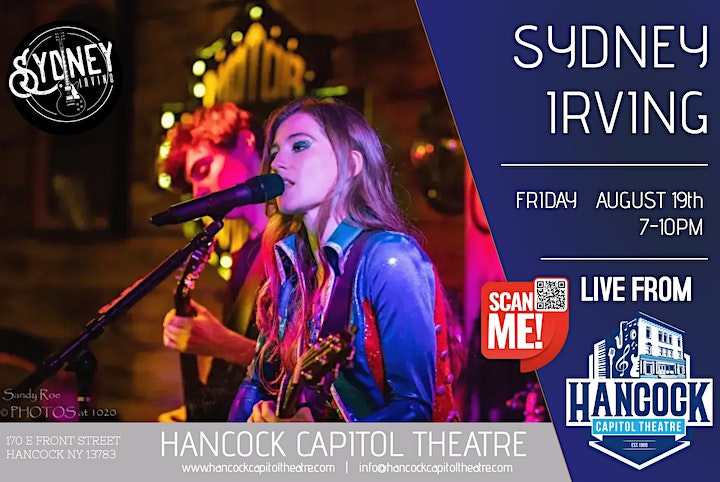